At the start of the film something about the entire setup did look a tad artificial. It is likeable but you feel it is a little overdone. The sort of feel you used to get in Tamil films from director Vikraman in his hey days. You genuinely get a fear if everything would be hard impressed when you see a card displaying �Enter with a Happy Heart� at the entrance of the kitchen in Jacob�s house. But this is just momentary and you get into the groove soon and begin relating to the characters. (more)

Don't Miss This One!

Jacobinte Swargarajyam is undoubtedly the best movie released in 2016 so far. Don't miss this one. (more)

Dad of all roles

Scripted and directed by Nithin himself, the story, says Renji, has politics and police but is not a clone of his kind of films. �There is a rusticity that has never been part of my movies. It is his own movie and he himself narrated it to Mammootty. In fact, when I suggested that I would step in if the thespian felt that the script needed reworking, he retorted: �I have worked in many of your films. Now, let me work in Nithin�s�� relates Renji with a laugh.(more)

Jacobinte Swarga Rajyam is the best film released in this summer.

On the whole Jacobinte Swarga Rajyam is the best film released in this summer so far in Mollywood. It is a perfect mix of youthful energy and family sentiments. This one can be considered as the best from Nivin Pauly- Vineeth Sreenivasan combination and will remain in your heart for long.(more) 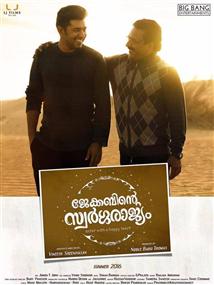