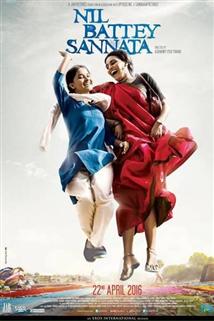 Nil Battey Sannata is an extremely realistic, straight from the heart film. This poignant story appeals to you instantly and is a perfect film to promote girl-education.(more)

Swara Bhaskar�s performance as a poverty stricken ambitious mother act will make you SALUTE her!

Ratna Pathak Shah as this scatterbrained doctor too was very endearing. Her words of wisdom for Swara and even the funny quips and antiques she did in the film was very cute. The light humour worked very well for the film as it wasn�t all serious and a tearjerker. Ashwini Iyer Tiwari�s direction was appreciative because of the segments she chose to show and the way she weaved the story.(more)

Nil Battey Sannata is also a good old story about life and its vicissitudes.

Nil Battey Sannata is easy to recommend. It is light-hearted, easy on the eyes and mind, and full of heart. This film says a great deal about a girl-child's struggles, a mother's hopes and the ways of the education system. But, in the end, Nil Battey Sannata is also a good old story about life and its vicissitudes. (more)

This Swara Bhaskar movie has a strong message

�Nil Battey Sannata� has a strong message about how education can change your life. It does underline the message, but stays just short of being preachy or message-y. And leaves you with a warm glow. (more)

Bhaskar affirms this with a rare power and simplicity -- a yawning difference from the parts she played as a modern woman in the Tanu Weds Manu series. As is often believed in Bollywood, an actor must be able to let go his/her own self and sink into a character and she does.(more)

Nil Battey Sannata throws light not only the endearing mother-daughter relationship but also subtly explores issues like poverty and education. Last year, we had Dum Laga Ke Haisha, a feelgood film which left a lasting impression on everyone. For me, this year it is Nil Battey Sannata. Watch this film with your mother. The film is truly a fitting tribute to mothers and their unconditional, selfless love. (more)

Bhaskar embraces the role of the indefatigable feisty mother who does not give up hope. This is one of her most nuanced performances and a welcome change from the motor-mouth characters seen in Tanu Weds Manu and Raanjhana. As a precocious teenager, Ria Shukla is a fine sparring partner. Pankaj Tripathi is the scene-stealer as the zealous school principal and Math teacher. He has a skip in his step and playfulness in his sternness, which are a delight to watch.(more)

Swara Bhaskar, Ria Shukla and Pankaj Tripathi enthrall with their riveting performances. Though the tempo drops considerably in the second half, Ashwiny ensures that the film never loses its charm. It does get preachy and you find yourself shifting in your seats a lot towards the final scene, but the movie wins you over with its innocence and simplicity.(more)