Debutant director Ram's offering, however, tosses you through a maelstrom of emotions, before bringing you back to earth. And the actors he has used to drive his point home don't just act -- they live. The dialogues are crisp and supremely natural, the events zigzag swiftly enough that you don't lose interest, and best of all, all the players stay in character. (more)

Amidst clichéd commercial films, Rama Subbu(Ram) has daringly come out with a different film. Technically far superior than the contemporary films, the movie has catchy music by Yuvan. The cinematographer has caught the emotions of each character at his best. A rare film which must not be missed! (more)

Director Ram deserves a standing ovation for not bowing down to commercial format and sticking to his theme with strong conviction. The screenplay is brilliant and has certainly set the bar high; the movie swings back and forth the timeline with consummate ease without confusing the viewers. It is very hard to single out the best scenes as every single frame has been chiseled to perfection.(more)

Ram has excelled in his directorial debut. The fiery dialogues, coupled with Jeeva’s excellent performance, make the movie a visual feast. Jeeva has outdone himself - easily his best role till date. Yuvan's music is a treat - blending with the story as easily as one breathes. The re-recording and editing have done wonders to the script. The camera is almost another character in the movie. (more)

Katradhu Tamizh with its telling tagline, ‘Tamizh M.A.,’ has some brilliant performances from Jeeva and Karunas. Lighting, tones and angles give the necessary amount of grayness to the narration and the art direction complements the mood. When you try to be different for the sake of being so, it only seems pseudo. Katradhu Tamizh is just that. (more)

"Kattrathu Tamizh" is an off-beat film which has been made with a high cinematic skill and great imagination. Debutant director Ram has taken up a lofty theme and captures it in a manner that touches the hearts of the audience. Director Ram deserves all praise for his bold attempt. It's a rare treat, indeed.(more) 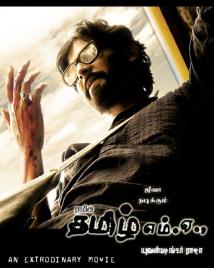