Maanagram could be new age cinema but it has its roots firmly in our good vs evil mainstream space. It does operate like the famous dialogue from Baasha that roughly translates to the good will face hardships but the end would always be on the right note.(more)

A deftly made film which gives you a wrenching impact, nonstop drive and unpredictability, that watching it becomes an exhilarating ride.(more)

'Maanagaram' is a must watch thoroughly engrossing thriller with the right mix of emotions and a realistic take on life in a metropolitan city like Chennai.

Selvakumar's cinematography is neat throughout (barring excessive lighting in a particular night scene) and Philomin Raj's Editing is seamless for a complex narration. Stunt choreography by Anbariv is realistic and impactful while the.(more)

A genuine attempt which is entertaining

Maanagaram is a gripping film that seizes your full attention. Book your tickets for the weekend and you will not regret(more)

A shocking night of clashing lives in Chennai

Maanagaram may seem confusing in its first few minutes with a medley of characters fighting for screen space, but the work soon settles down to greater clarity and even narration -- which is peppered with surprises. And these, of course, keep your attention riveted to the story.(more)

The director also strikingly uses humour to cut through the nail-biting tension every now and then, mostly through the character of Winnings, a wannabe criminal, and Munishkanth is excellent in this role. These comic moments do not ruin the tense mood of the film, instead they augment it, for what they invoke is nervous laughter that makes us titter at a character's hapless situation or action because we are never what might happen next as the threat of violence is always around.(more)

Maanagaram is easily one of the best films in Sundeep Kishan's career and it makes you wonder what had happened to him after a solid debut in Prasthanam several years ago. Another actor who makes you empathise a lot with his fate is Charle who plays a cab driver. Regina and Ramdoss too nail their performances. (more)

An absorbing emotional thriller that is a must-watch!

As a na�ve kidnapper, he beings the roof down with his one-liner antics and even the dark humor works to a great extent. Overall, an absorbing emotional thriller that is a must watch movie. (more) 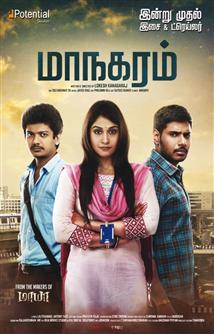