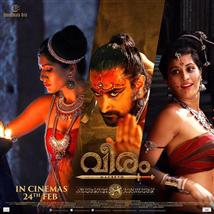 Where the movie suffers though is the lack of an engrossing and engaging screenplay, which is much required while telling a familiar story to a Malayali audience. While care has been placed on making the movie just 144-minute long, it is not gripping enough. However, there are some epic moments in the duels in the film that will remind many of the Hollywood film 300. And for a Malayalam movie to accomplish that is no mean feat.(more)

Veeram is brisk and a very good cinematic attempt to give life to the characters of Kerala�s traditional ballads. However, the film seems to have fallen short of the mark in striking an emotional connect with the audience. Instead, it ends up as a skillfully crafted film that you are awe of its art but you feel helpless like Chandu, when he has curling blade around his neck, as it is impossible for the audience to empathise with the tragedy.(more)

A Grand Visual Treat, Minus Performances

A technically brilliant movie, that would have gone to another level with a better star cast and performances. (more)