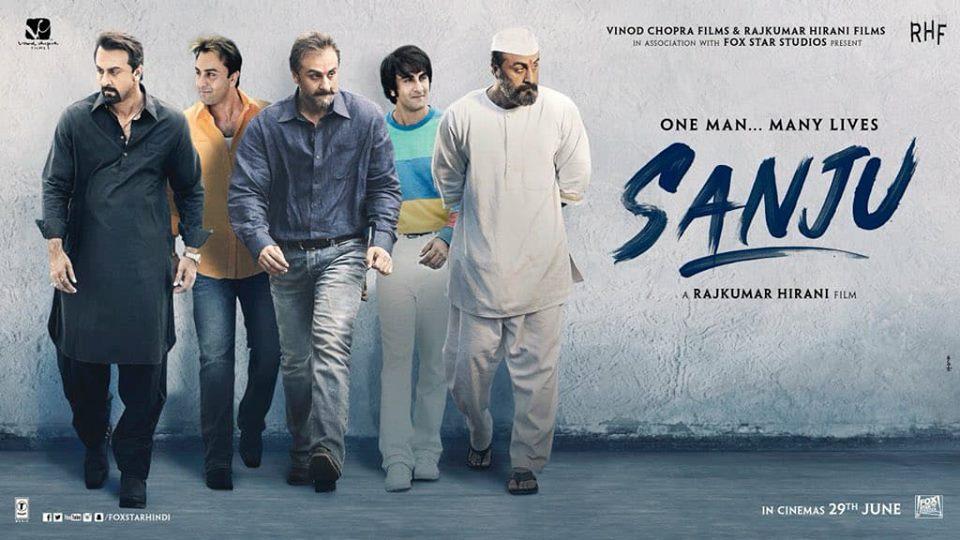 A biopic that prefers Humanizing over Idolizing!

Rajkumar Hirani's SANJU with Ranbir in his deadliest form, is a story of one lifetime that stretches over periods in bringing us a person's relationship with his father and a friend. When we sit in front of the screen, expecting the biopic to idolize Sanjay Dutt.. Hirani surprises us all by humanising him!(more)

Presenting a biopic on a man with so many shades and one who's lived a life of such extremes is a no mean feat. Hirani, in his signature style, takes you through Sanju's remarkable journey with the finesse and commitment it needs. In the film, Sanju's wife says that he's the king of bad choices, and Hirani's idea of making a film on his life has certainly paid off. Yes, there's a lot missing, but even then, this is still an incredible story of a man and a movie star who made massive mistakes, walked through fire, survived it and lived one heck of a life. (more)

Ranbir Kapoor is the soul of this Sanjay Dutt biopic

Hirani's Sanjay Dutt, played by Ranbir Kapoor, is an ordinary person who feels and behaves like any of us. He doesn't behave like a Bollywood star and seems really low on confidence in his youth. The charisma of Ranbir Kapoor is at work here as he imitates Dutt's body language and mannerism with perfection. He is the soul of Sanju.(more)

Ranbir Kapoor Gets A Pool To Reflect In & He Grows To Conquer!

All said and done, Sanju entertains, surprises & blows your mind. Ranbir Kapoor stays in the zone & rules it. Vicky Kaushal is going to fly high after this one. Rajkumar Hirani achieves the excellence 5th time in a row!(more)

SANJU will score tremendously and emerge as a Monstrous Hit! Don't miss it!

SANJU is an entertaining saga that blends emotions, humour and drama in adequate doses. It is powerful, engaging, emotional as well as compelling. The combination of Rajkumar Hirani and Ranbir Kapoor works like a dream. At the box office, despite not being a 'typical Rajkumar Hirani family entertainer'.(more)

Sanju is undoubtedly Ranbir Kapoor's career best performance and will fetch him all the awards and recognition. Don't go looking for a fair and accurate depiction of Dutt's life and you won't be disappointed. Watch it for the sheer entertainment it provides and the unmatched versatility of Ranbir Kapoor.(more)

It is not child's play to make a biopic, particularly on someone whose life has been splashed all over the tabloids, in excruciating detail. Given the kind of biopics we have seen in commercial mainstream Bollywood so far, Sanju has definitely raised the bar. Watch Sanju for Ranbir Kapoor, Rajkumar Hirani, the laughs, the tears... in a nutshell, everything.(more)

Ranbir Kapoor is superb, but what a startlingly dishonest Sanjay Dutt biopic this is

Kapoor's turn as Sanju Baba rises far beyond his physical transformation though. He delivers an immersive performance, especially in scenes of emotional intensity when the script is not using a farcical tone to soft pedal the hero's life choices. But even this gifted star cannot camouflage the reality of Sanju being little beyond a PR exercise for Sanjay Dutt (and Manyata Dutt).(more)

what we get, and how we get it, in Sanju, is mostly engaging, and some of it good enough to make you laugh out loud in pleasure, especially when Hirani is killing it. But you wonder too what the film chose to leave out, and you wonder if this would have been more of a film if those things had been in here.(more)

I'm going with three-and-a-half out of five for Sanju. It's a consistently engaging film that makes its way to your heart even though the head frequently resists.(more)