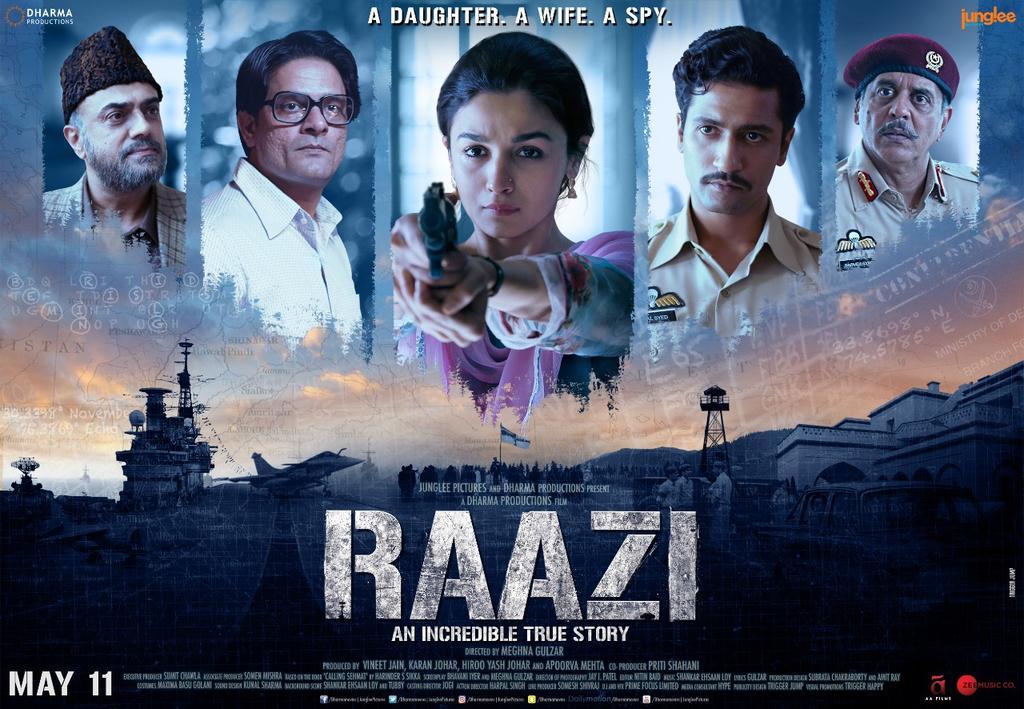 Raazi, on the other hand, is an espionage enterprise with heart and soul tempering its gritty core. Even as it kept me on the edge of my seat for its entire 140 minutes, it broke my heart.(more)

However, at a time when hate and anger are the currency of the subcontinent, a film like Raazi needs to be made. For peeping into the Valley and finding a true-blue patriot, for looking across the border and finding decency, and for giving Kashmiri embroidery as worn by Alia an authentic, modern, featherlight touch. Like a delicious Indian irony, expect the clothes to linger around longer.(more)

RAAZI REWRITES THE SPY-THRILLER GENRE WITH EMOTIONS, INSTEAD OF EXPLOSIONS

Amidst all the compelling performances, this is Alia's film as she continues to push her boundaries as an actor while challenging our expectations of her. In the same vein, 'Raazi' defies the spy genre's traditional expectations of full-blown action sequences. Instead, Meghna Gulzar's steady hand gradually ramps up the tension throughout, leading to an explosive final act in this strong dramatic thriller. It also leaves you questioning the repercussions of war on the human psyche.(more)

Raazi is a sensibly written and finely performed film that takes a close look at the ordinary lives of extraordinary people. Not to miss.(more)

This spy thriller is a masterstroke

Raazi celebrates the spy-thriller genre and proves good content prevails. Perhaps, a lot of aspects make this film unapologetically finest of 2018 so far.(more)

All said and done, Raazi is a magnificent and unmissable tribute to the unsung heroes of our country. It explores a brave story which was in shelves for long time now. Alia Bhatt has just smashed every barricade for being a superlative actress(more)

A meritorious story that deserves to be told.. Brilliantly narrated by Meghna Gulzar.

RAAZI is an interesting thriller brilliantly narrated by Meghna Gulzar that makes for mature viewing. It is a film that celebrates nationalism that is devoid of the colors of religion. At the box office, it has the potential to grow with positive word of mouth and keep its makers happy.(more)

There is a lot to like in Meghna Gulzar's spy movie, but Alia Bhatt makes it hard to take Raazi seriously(more)

An Excellent Film That Humanizes The Enemy

Raazi is an excellent film because of how easily it could have not been one. On another day, this might have well been a jingoistic Neeraj Pandey actioner called Naam Sehmat. But Gulzar and her co-writer Bhavani Iyer don't lose cultural context of their material.(more)

Raazi is a suspense thriller so tautly executed that I could feel knots of fear in my chest for several hours after I had stepped out of the hall. The unrelenting parade of risks and twists owes as much to Meghna's conviction as to Nitin Baid's brisk editing, Kunal Sharma's intelligently crafted sound design and the nerve-wracking background score by Shankar Ehsaan Loy and Tubby.(more)

The film is admirable also because it's a measured, mostly intelligent thriller that asks us to consider concepts of patriotism and honor without spoon-feeding us with manipulative background music or provocative dialogue. It's well paced, and set to a thouhgtful score by Shankar-Ehsaan-Loy that never distracts from the drama. I'm going with three-and-a-half out of five for Raazi; a worthy follow-up to the director's last film Talvar.(more)