A suspense drama that scores high on style!

The film gets on top gear right away and this pacing more or less remains constant through the entire length. The film has an uber cool look to it but what really stands out is the absence of any gimmicks. The stunts are neat and simple. ARR tunes are not used as standalone songs. You get the crowd-pleasing moments but the nonchalantness of these moments is what makes CCV stand out from the crowd. CCV is Mani Ratnam delivering to popular taste on his own terms. CCV is the most palatable Mani Ratnam film to the mainstream audience in the recent past. The film sort of easily delivers what it had set out for.(more)

CCV is a worthy family gangster drama in true Mani Ratnam style with massy fan moments. Go for it!

Every star has his mass moments that will be celebrated by the fans! In a nutshell, don't miss the skies turning completely red as Mani Ratnam deals with an intense family rivalry drama.(more)

Mani Ratnam after a long time has gone back to his favorite genre, the crime drama that has shades of both 'The Brothers Karamazov' by Fyodor Dostoyevsky and Maria Puzo's 'The Godfather'. The characterizations are brilliant, the staging authentic and the telling gripping and this time the longest serving commercial filmmaker of India has sure come up with a winner.(more)

Mani Ratnam gives us a delicious twist on The Godfather with Chekka Chivantha Vaanam.

The film really takes off in the second half when the battle for Senapathy's throne becomes the dominant plot point as the brothers try to outwit one another. And Mani Ratnam goes all out commercial, giving each of his stars their mass moment(s). The actors are all equally good and have a gala time.(more)

All about family feud, greed, thirst for power and revenge!

Despite being a multi-starrer, the runtime is just perfect, special mention to the end credits which is in the form of the investigation report. Overall, Chekka Chivantha Vaanam is easily Mani Ratnam's best work in recent time. He has crafted a powerful film that you won't be able to shake off immediately. (more)

While the number of characters and pacing does pose a problem in CCV, the performances make up for it. While the three brothers breathe life into their respective characters, the film belongs to the understated Vijay Sethupathi, who plays Arvind Swami's childhood friend. He plays to the gallery at times, and yet springs to life at crucial junctures. That he teamed up with a director of Mani Ratnam's calibre might be the best thing that happened to him� and to Tamil cinema.(more)

Chekka Chivantha Vaanam is not your regular Mani Ratnam film that you may have seen in the last 10 years. His focus is totally fixed on the four principal male lead actors. It is totally an alpha male film with women relegated to the background, providing some emotional solace being their sole job and the director is not apologetic about it. There are no dialogues for the only sister to the three brothers in the film. There are hardly any romantic scenes and not even one lip-sync song. AR Rahman's music is abrupt and remains in the background.(more)

Throughout the film, Mani Ratnam keeps projecting these characters like kings and royals. Literally, there is a throne for Senathipathi at his home. When Varadhan is asked to choose a name for his sister's son, he goes with 'Raja'(King). But all of the glorification is overturned in the brilliant climax.(more)

Chekka Chivantha Vaanam feels like the work of a fresh director with an impressive understanding about the craft of filmmaking. It could be because auteur Mani Ratnam has made a violent film after a very long time. It could also be because it is a straightforward movie, in which he has highly favored words to images.(more)

So many characters disappear into thin air (again, what is Aditi Rao Hydari doing in this movie?) or die in unmemorable ways. A bullet in a character must give us a punch in the gut. Otherwise, it's just an action scene, not drama.(more)

Director Mani Ratnam is back with an intense gangster drama that is gripping till its very end.

Director Mani Ratnam has smartly found the balance of delivering a realistic action drama that covers the commercial aspect too. The climax twists are sensible, practical and provide the much-needed impact as well.(more)

Chekka Chivantha Vaanam is a perfect on-screen experience, which only a craftsman like Mani Ratnam can offer. It is not a routine mass masala fare but a solid gangster drama told in the backdrop of brotherhood, relationships and power. Don't miss this one, folks!(more)

A Mani Ratnam Film That Is As Mainstream As It's Restrained

Mani Ratnam films have always been technical fiesta, but surprisingly, it's the characters and their complex human tendencies that make this film exciting. CCV is a revenge drama that would leave you captivated and spellbound.(more) 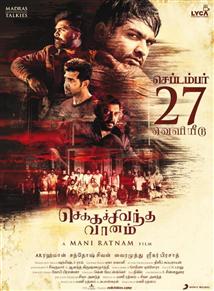