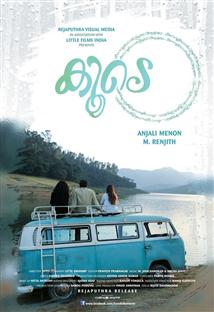 A Poem Of Love

Anjali Menon presents her scene as a poem drenched in nostalgia. Like the title sequence in the film where we see rain filled vessels, rain drops in flowers, kids running with an umbrella, train entering a dark cave.. she sketches her film that takes you back to a time that's deep within your heart now. And from tears to words, a scream to silence.. everything hits you. I wish there are filmmakers like her here.. who can write a character of a dog like a human we know for a while.. who can make such little films with so much of soul in it.(more)

One from the heart!

Koode is one of those films with its heart at the right place. It's genuinely affecting and can make your eyes moist at times, with its sincerity. Go for it!(more)

This Priceless Tale Of Relationships Will Stay In Your Minds Forever!

Koode is a film that shouldn't be missed by any chance. Like the makers had promised, Koode is indeed a heart-warming tale of relationships and this invaluable tale will definitely remain in the minds of the audiences forever and ever.(more)

A realistic take on relationships

Anjali has always succeeded in moving the audience's hearts with her stories; this time she takes us on an emotional journey. As the title suggests, the film and its characters will reside with you, always.(more)

Koode is a breezy, feel-good movie that has good performances, visuals and neatly sketched characters that will stay with you even after you leave the theatre.(more)

A Good Film That Could Have Been A Great One

Koode (adapted from Sachin Kundalkar's 2014 Marathi film, Happy Journey) is Joshua's story: of a man who suffers from a (somewhat justifiable) martyr's complex, having hoisted himself on the cross, since his teens, in order to become his family's Saviour.(more)

I might have preferred it if the concluding scenes involving Joshua and Sophie's stories had completely abjured social conventions or been left to the imagination, but that is a marginal quibble in a film that is, in its entirety, a near spiritual experience. Anjali Menon's Koode is a sharply observant, occasionally humorous, emotionally stirring piece of cinema.(more)

Prithviraj, Parvathy and Nazriya Nazim shine in this moving film

Nazriya brings her own element to Jenny, which is otherwise a stock character in such films. Jenny is full of life and a chatterbox that we have grown used to in movies that teach us how to live our lives. Nazriya has delivered a heartening performance, which is the right mix of cute and charm. Especially in a scene where she has her first fight with her brother, Joshua.(more)

Prithviraj, Nazriya's film is a heart wrenching poem in motion

Sometimes, the film tells you, all you need is a human being who truly cares for you. But to find yourself, you always need to look beyond obligation and shackles. There, at the horizon, lies true freedom.(more)