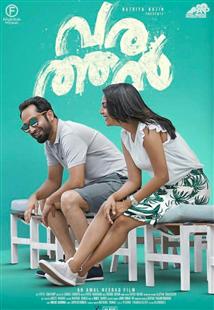 Varathan narrates a rather simple plot in a thoroughly engaging way. It's a beautiful portrayal of a relationship and then, deals with some highly pertinent issues that we come across in the society around us. Go for it!(more)

A Scintillating Experience That Deserves To Be Savoured From The Theatres!

Varathan would easily find a place in the list of the best theatrical experiences of the recent times. Amal Neerad, in his own style, delivers a taut and sharp movie, which will keep you on toes. For the lovers of the genre, this one is simply not to be missed.(more)

Varathan takes its time to simmer in the first half, with its songs and varied characters, but in the second half it comes all guns blazing and turns into a stylish survival thriller worth watching.

While the premise is limited, scriptwriters Sharfu and Suhas have kept the proceedings taut. However, the makers have taken a page or two out of the Hollywood movie Straw Dogs and adapted it brilliantly to suit the Kerala context. Sure there might not be the boiling oil scene, oh wait, there is --- only with a fuel and flame thrower. Same effect but more stylish. (more)

A cracker of a suspense thriller

The casting of the film is just the icing on the cake. Just the presence of characters played by Sharaf U Dheen, Arjun Ashokan and Vijilesh Karayad near the compound of Priya's house, sends a chill down our spines. Aishwarya and Fahadh are in top form in this thriller.(more)

a prismatic narrative with terrific, and terrifying, cadence

The film is rich in atmospherics, and adding to it and giving the narrative its formidable edge is Sushin Shyam's BGM. Littil Swayamp's camera plays with tones and angles while brilliantly capturing the mood of the narrative. Gritty, sleek and sinister, Varathan is undoubtedly Amal's best film so far. Of course, the director hasn't abstained from his fetish for slow-motions or glorious camera angles but, this time, style comes with a soul, hand-in-hand, creating a terrific and terrifying cadence.(more)