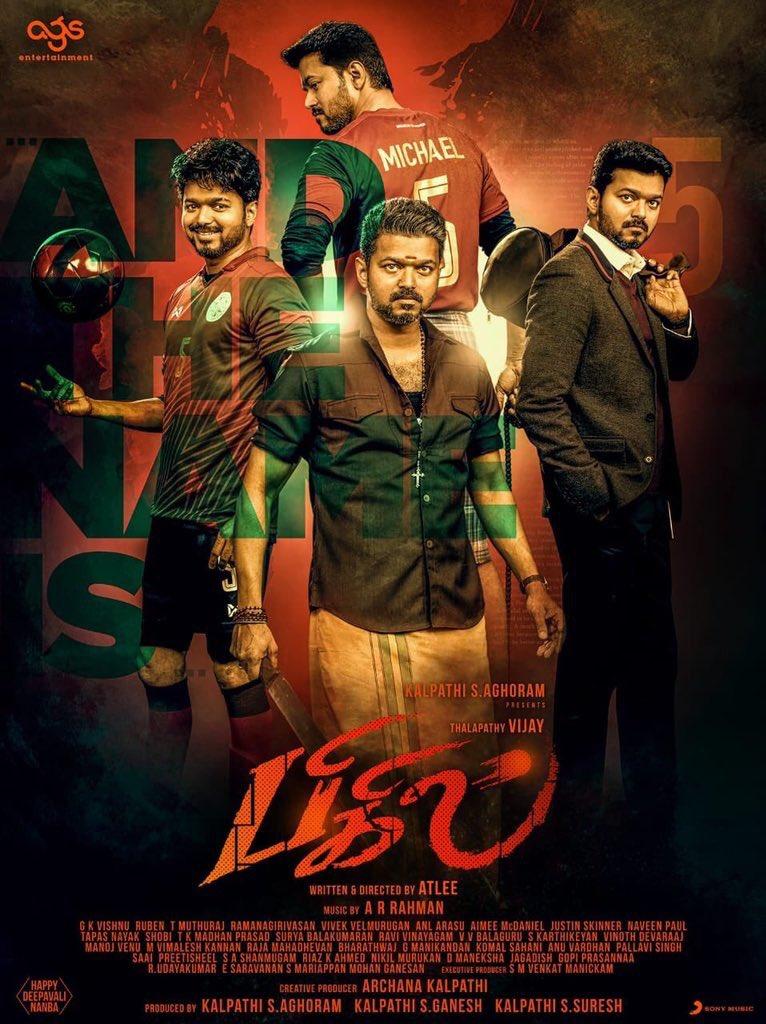 Bigil is Vijay's Career Best, Yet

Bigil will put Vijay in the next league. His overall performance in Bigil surpasses that of Mersal, Kaththi, and Thuppaki. The box office will also prove to be the same. Bigil will be a perfect Diwali Celebration in theatres for entire family. DON'T MISS IT !(more)

The sports movie must-haves � a team in disarray, the cold shouldering of the new coach, his attempt to gain their respect, the antagonist (here, it is Jackie Shroff, as JK Sharma, a upper class businessman), the on-field drama, and AR Rahman's anthemic score � ensure that the second half feels like a breeze compared to the laboured first half. The girls who form the players in the football team � Indhuja, Reba, Amrita, Indraja and Varsha � get their moments, and do well, though their characters lack depth. But that is the case with the film as well. Like the director�s previous films, Bigil, too, lacks depth. And it is overlong. But the calculated attempt to turn the film into a women empowerment saga works. Even if the film reinforces the male saviour complex, you feel glad when a female character, an acid attack survivor, gets the loudest cheer.(more)

Bigil is an engaging star vehicle with sports as its backdrop, which could satisfy the family audience during the festival season.(more)

Despite it's predictability, Bigil is lead to a victory by the impressive Vijay!

Bigil is technically rich, but falls short in the execution. Had Atlee worked more on the screenplay, getting rid of cliches and a shorter runtime, Bigil could have been better. Nevertheless, Vijay solely makes this sports backdrop entertainer worth a watch with his charm and performance.(more)

Had director Atlee got this match right, Bigil might have ended up being a far more entertaining sports drama.(more)

The main issue with Bigil is its predictability. You can easily guess the characters who will end up dead and who get maimed. Despite all that, Bigil is a treat for Vijay's ardent fans.(more)

Bigil is designed as a crowd-pleaser from the very word go; with the basic underdog story, women empowerment and equality as themes, it works to a large extent. Vijay takes Bigil to its winning goal.(more)

Bigil relies squarely on the charm of its leading man and Vijay dives into the character with an enthusiasm we haven't seen before. It is a paisa vasool mass, sports action entertainer which is sure to be enjoyed by the masses and family audiences. A perfect Diwali outing with ur friends and family. (more)

Bigil has everything going for it technically. Cinematographer GK Vishnu lights up every frame with care and lends it the look of a festival film; where the grit is seen, but through a patina of gloss. Choreographer Dinesh Master has a great dancer to work with, and it shows in the final output. The dances are lit, and some steps will find themselves recreated pretty soon during college culturals, among the greatest validation. Music by AR Rahman has been much discussed, but music is not one of the strong points of this film.(more)

he makers have tried to infuse a lot of messages through a single film, but only a few work well. If predictability is a worry for you, then Bigil might appeal one step lower, but if that isn't a problem, Bigil can surely be enjoyed. In a nutshell, Bigil is an entertaining and inspiring sports drama that works due to its packaging.(more)

The screenplay could have been tighter, but it's still a model of how we can get serious even in the overblown world of a "mass" movie, and yet not forget to have fun.(more)

A star is forced to remain a star throughout

If Mersal closely resembled Aboorva Sagotharargal, Bigil is the modern version of half-baked Naayagan, sans vision and class. I think I'm being kind.(more)

Vijay saves women in this film about women empowerment

Towards the end, this film, that is ostensibly about women empowerment and dedicated to women no less, exposes its true intentions when it suggests that the eleven women on the football ground are like 11 versions of Bigil. In this film coldly, cunningly designed to offer guilty entertainment to forgiving admirers of the star, this is probably its most honest moment.(more)

Director Atlee does a very good job, in that every single character -- even if they have only one dialogue -- is clearly etched, and have their moment in the sun.(more)