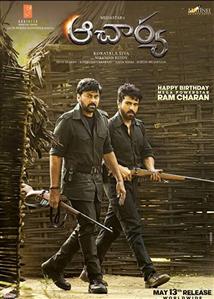 This flick is the perfect example to prove that big stars in a mass setting alone cannot save a film as there are larger aspects for a commercial film to be attractive like a solid script and something different in the narrative style.(more)

Chiranjeevi, Ram Charan seem inadequate to save this spiritless film

Acharya is a classic good versus evil tale. And the story unfolds along excruciatingly predictable lines. The narration works like clockwork. A movie fan would be able to predict how the story will progress from the beginning to the end without much mental effort. There is not even a single surprise element in the movie as you can see all twists from a mile off.(more)

Though the second half has nothing new, it is fairly better than the dull and archaic narrative of the preceding sequences. Ram Charan, for some moments, brings energy. But the film again slips into mediocrity. Finding freshness in any of the scenes is like searching for a needle in the haystack. (more)

Acharya is a temple town drama that has some good father-son moments. The backdrop is decent but the narration is insipid and does not gives the audience a high. Storywise too, there is no novelty and the electrifying drama one expects from a Koratala film is missing. The regular audience will get disappointed with Acharya but Chiranjeevi and Charan make the fans happy, with their chemistry and solid screen presence.(more)