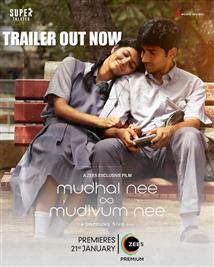 A Pleasant Throwback To Adolescence In The 90s!

The second half of the film is where things start falling apart a little. The characters are now probably in their 30s and meet for a reunion. We get to know where each of them stands in their lives. The comedy which worked so well earlier, comes across as forced now. The performances don�t seem as seamless as before. The new characters (husbands, wives and fianc�s) come across as caricatures at times. There is also an intention to drive home a message about the LGBT community. But the writing seems convenient and we really don�t buy into the change of heart of the Richard character. But there are redeeming aspects as well. (more)

Despite lacking a solid plot, the film�s first half is as pleasant as a rare cool breeze during a Chennai summer noon. The sepia-toned visuals, Siva�s light background score, and the adolescent banter and pranks make the film easily palatable. But only until the first half, after which the film begins to meander. (more)

A Pleasant But Predictable School-time Drama

So Mudhal Nee Mudivum Nee does not have the feel and the texture of Darbuka Siva�s music albums. As a director, he settles for something easier, more convenient and something more comfortable. But because we grow to like these characters quite a bit, all of them, the film isn�t a bad watch either. (more)

A TRIP DOWN MEMORY LANE THAT IS WORTH WATCHING

Overall, the film is definitely worth-watching and would be loved by the generation who miss their school days.(more)

A nostalgic musical trip to your school days, with a superb first half.

Overall, the first half of the film is brilliant technically and is shouldered by the performances of the fresh faces, led by Kishen and Harish Kumar. The writing in the second half lacks direction and focus, and looks lengthy. This affects the engagement, making the audience lose interest before the climax. The 90's nostalgia and a thoroughly entertaining first half is a good take away of MNMN. (more)

This tale takes you on a trip down memory lane; worth a watch

On the whole, if you are someone who is missing your school and college days, and want a trip down memory lane, then this film is definitely worth watching this weekend. (more)

An emotional experience that takes you back to school

Mudhal Nee Mudivum Nee might be a dream debut for most of its new actors, and their lack of experience helps us buy their performances. Even small nuances, like the changes in their behaviour as adults, come across as the result of evolution. Kishen as Vinoth gives a compelling performance and becomes everything the character is expected to be: A goofy friend of Chinese, a love-torn teenager, a matured musician with no zest for life, and so on. Harish, on the other hand, steals the show as Chinese. He brings his own quirky eccentricities to this beautifully written character and makes you yearn for a friend like him. Actors like Rahul, Purva and Meetha seize the opportunity every time they appear in the frame.(more)