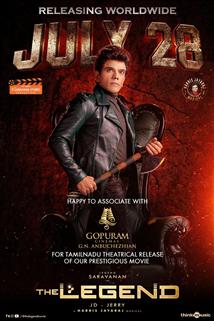 Over the top commercial masala that could have had better writing! The film will be your stress buster if you know what to expect, else might leave you stressed. (more)

Legend Saravanan's vanity project is commercial cinema at its dullest

The one thing that JD-Jery get right is in glossing their product to hide its two major shortcomings - writing and lead performances. The film is mounted on a scale that reminds us of big-star movies from the 2000s, and even the plastic visual tone (R Velraj is the cinematographer), and grand but empty score (by Harris Jayaraj) are from that time. Alas, if only had they spent some of the money that they have splashed on the needless songs and stunts for the writing! Forget a wannabe star like Saravanan, even a bona fide superstar like Rajinikanth wouldn't have managed to save this vanity project.(more)

Saravanan's vanity project is more a vibe than a film

The Legend is mounted on a concept that expects the audience to root for the protagonist. However, here there is a sense of rooting, not for the character but for the textile giant Saravanan himself. It is evident that he didn�t do all the stunts, especially some of the jumps because the VFX is as clear as the green screen used. But still, we clap. The lack of histrionic ability is just overwhelming. But still, we whistle. The audaciousness of the plot is laughable. But still, we hoot. The song and dance routines feel so out of place in The Legend. But still, we groove along. We have done it for innumerable star vehicles before. We have let our better senses be sidelined to allow our basest feelings to come to the fore and enjoy a film. For the uninitiated, the film might be just one big joke, but honestly, Saravanan and team clearly know what they wanted to do with The Legend. They are all in on the joke, and so are we.(more)

The experience of watching The Legend on a packed screen is a rather enjoyable one. You read that right. For instance, when Saravanan suffers a terrible loss and cries his heart out, the audience bursts into laughter. This happens every time the actor is forced into an intense situation that requires him to emote much. Perhaps the ghosts of his popular trolls have followed him to the big screen, and like his previous attempts, this might end up working in his favour given how bizarre it is to watch a campy film as such with no care in the world.(more)

An elaborate advertisement of a bloated ego

JD and Jerry have made much better ad films, and The Legend ends up as an elaborate and expensive addition to their stable. The pseudo movie aims to sell Saravanan Arul as a star. Unfortunately, the attempt is in vain since stars � both cinematic and celestial � cannot be designed.(more)

The Legend is an epic snore-fest. The film is quite disappointing with a lackluster screenplay and many boring elements. The director tries hard to give a proper masala entertainer but he fails to do so. The amazing production values and the lovely heroines are the saving grace in this routine drama. You can skip it and wait for another good film this weekend.(more)