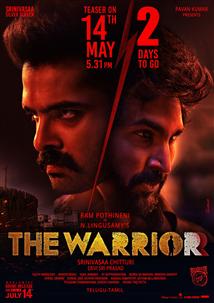 This war is a lost cause

Director Lingusamy has been going through a low phase and has been looking out for a strong comeback on screen. However, he Warrior which he has written and directed, is definitely not that film. This movie seems to be a potpourri of some of his earlier films where the hero plays a cop who is out to get the bad man and remove evil from society. The story is highly predictable with cliched dialogues and poorly written. (more)

Try not to fall asleep in this Ram Pothineni film

Lingusamy has repeated the same movie that he has been making throughout his career with different actors and costumes, including the 'loosu ponnu' archetype.(more)

First half of the film works for the masses, second half is not up to the mark.Ram and Aadhi did perform well. Entire movie runs on Satya Vs Guru thread, which turns as the major drawback.(more)

yet another disappointment from the seasoned filmmaker. The Warriorr takes off on a regular note where the hero is introduced followed by a song and then the hero shifts from Hyderabad to Kurnool where he meets his love interest (Krithi Shetty). There are some cute moments of romance initially. But they are not enough to take the story forward.(more)

Lingusamy is known to make action films in a particular style and has done the same with this film. Though the narration is decent, it does not arrest you much with its screenplay. More hero villain elevations should have been added from the first half itself. (more)

Ram and Aadhi shine in this commercial potboiler

The Warriorr is a masala-laden commercial pot-boiler that�s meant to be watched over a shared bucket of popcorn. There�s no �relief� or unnecessary comedy scenes (just unnecessary duets) breaking the flow of this war between Satya and Guru. Watch it if that�s the kind of cinema you like.(more)

It's disappointing that a film that attempts to try so many things lacks in execution. The screenplay offers no emotional drive to keep us invested � something that recent films like Ayyappanum Koshiyum ( Bheemla Nayak), where an ego trip was enough to make a solid conflict, managed to do. Lingusamy's long journey to find his redemption proves to be longer, and for Ram Pothineni, who wears his heart on the sleeve as Satya, it's another futile attempt and an unlucky debut in Tamil.(more)

The Kurnool backdrop, a rowdy controlling the entire city, a police officer taking on the rowdy� none of these are new to the Telugu audience. Perhaps, director Lingusamy thought a doctor becoming an IPS officer to give treatment to the wounded system might bring newness to the mass genre. It would have been different had he infused some energy in the latter part.(more)

Ram Pothineni and Krithi Shetty's film is a cringe-fest

The Warriorr is a film that has wasted crores of rupees on a story that we saw ages ago. Every moment in the film reminds you of a scene you have watched in some or other commercial entertainer. Aadhi does a good job initially, but his role is reduced to a caricature. The less said about Devi Sri Prasad�s jarring music, the better. Because you would have lost half of your hearing capacity by the time the film ends.(more)

A formulaic template mass masala that is let down by average writing!

The Warriorr is a formulaic and template action drama that strictly goes by the old book treatment. Due to this, the film is largely predictable. Even the 'supposedly' unexpected pre-interval twist falls flat because you have already seen it coming. The twist had already been revealed in the trailer and so there is no cinematic high that you get when the reveal is made. The film doesn't offer anything new in terms of screenplay and writing and it is the regular good vs bad that we have been used to seeing for ages. That itself becomes the biggest issue for the movie. The film did have the potential to become a solid action entertainer but falls flat because of its predictable and ineffective writing. (more)