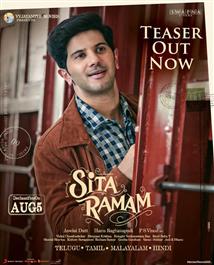 Poem In A Cinematic Form

A sensible period love story that�s narrated in a smart manner, in such a way that would connect with current gen storytelling style. Gets the subplots right, has plenty of elements apart from romance that are efficiently brought inside the script.(more)

What this film needed was a lot more focus on the love story and less on presenting Ram as this impeccable man of integrity. A director doesn�t need 10 scenes to establish one fact. If done right, a single shot is enough to establish that.(more)

The lead performances play a very key role in making the audiences root for the characters of Dulquer and Mrunal Thakur. As the film reaches the end, you�re eager to know what happened to Ram. Both Dulquer and Murnal are terrific in their respective roles and the chemistry they share really makes scenes between them feel so alive on screen. Rashmika plays a very interesting character and she isn�t your quintessential heroine. It�s a character that goes through a transformation which is well brought out by her performance.(more)

A predictable but poetic tale of love

With Sita Ramam, Hanu manages to deliver a story that�s moving and a film that�s visually aesthetic and pleasing. Go watch this one if you�re looking for a breather among all the mass masala.(more)

Not everything about Sita Ramam works to the extent of making it a classic love story the makers wanted it to be. Yet, the earnestness with which they attempt to narrate a moving story of romance holds it all together. The key characters may be called Ram, Sita and Afreen. Change their names and religion but the essence of what the story conveys will still hold true. Therein lies the beauty of the tale.(more)

Sita Ramam is a beautiful love story. The film has a decent first half and great second half. The scintillating performances by all the lead cast, the pleasing narrative, and the poetic writing will make you poignant and heartwarming. As the film is centered around a simple love story and war, it may not be overwhelming to the masses. Almost all the departments did a superlative job. Director Hanu gave us a beautiful and aesthetic love story that should surely be enjoyed on big screens. You can surely watch this film without a doubt. It is worth all your money.(more)

"Sita Ramam" is a clean and neatly told love story. Watch it for the lead pair�s chemistry, beautifully shot frames, and the final 40 minutes. Despite issues like slow pace and length, it makes a good watch for multiplex audiences and people who seek out classy dramas. (more)

Sita Ramam is technically sound and visually stunning. Cinematographers PS Vinod and Shreyaas Krishna�s work is simply brilliant. So much so that every frame looks like a painting. Vishal Chandrasekhar�s music is moving. Sita Ramam is also a musical, as opposed to a romantic story about war. If only Hanu Raghavapudi had ironed out the shortcomings, Sita Ramam could have been a masterpiece.(more)