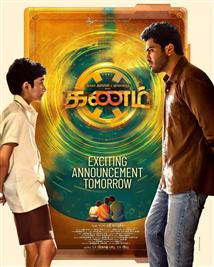 Follows the slow and steady wins the race path, a simple and a neatly made sci-fi flick with no complex stuff. Despite the lags, an engrossing watch for the most part topped with the right amount of emotions.(more)

The warmth that Amala (who is returning to Tamil films after three decades) exudes and the longing that Sharwa conveys (his expression when he gets to taste his mother's food again is a standout) go a long way in endearing these characters to us. The sub-plots involving Kathir's attempt at getting his younger self to show interest in his classmate who is bound to become a stunning model and Pandi's attempt at making his younger self get serious about studies add levity to the proceedings and ensure that things don't get too serious.(more)

Kanam is a delightful debut for Shree Karthick. Not only has he created a compelling film, but he also managed to provide enough fan service to his favourite star Rajinikanth (it�s charming how these moments too become a part of the narrative). Above all else, it is the loveliest of tributes to his late mother.(more)

Kanam is thoughtful in its approach to dealing with one's emotions. There is no unnecessary glorification or dramatic music to elevate a scene. The emotions are as real as they get. And that's where Kanam stands apart. The concept of time travel is not just a visiting card for Kanam. It travels throughout the story and in a compelling manner.(more)

The focus is on emotions, rather than on twists or frantic time machine adventures. But with this premise, I could have used a few more emotional highs. (more)

A big idea, a bigger heart

In fact, even during the runtime of the film, whenever I found time from wiping my tears or sporting a wide smile, I was traversing multiple timelines in my head. However, there is also the fear that too much is left to chance, and we aren�t sure if a course correction in our past is the best way forward. All we have is the present, and Shree Karthick has designed a film that might seem like a conversation with time but is a deeply introspective piece, which urges us to make peace with our decisions and where life has brought us. We know time heals� and films like Kanam remind us that art heals too.(more)

Nostalgia and Sentiments work in this time travel

What works big in 'Kanam' are the mother-son sentimental scenes and the journey is engaging due to that. Similarly the nostalgic moments of the late 90s help in realizing how things have changed drastically now. The interval twist involving the younger versions of the hero and his friends is what keeps the audience invested in the second half. (more)

Solid performances and simple writing makes Kanam a film to be cherished.

Overall, the message it tells us is conveyed in a non-preachy way, and the point is driven home. Despite a second half which might seem long for a small section of audience, the film's unsaturated sweetness makes this a wonderful watch. The performances and music also take this several notches higher. Do not miss this!(more)