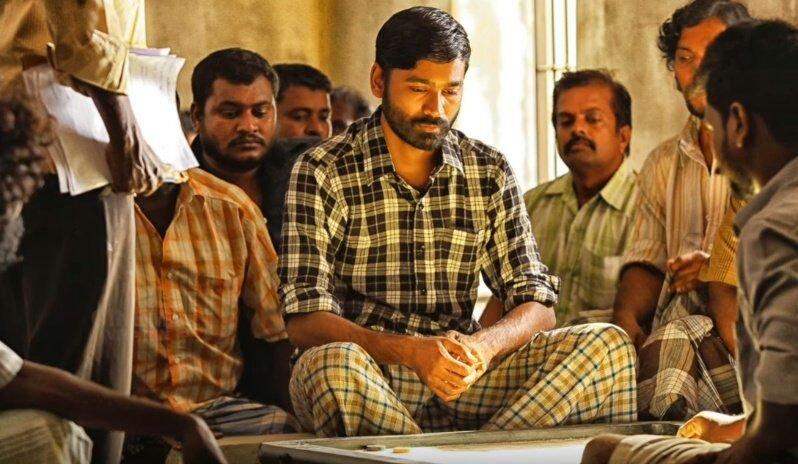 A blood-curdling story of revenge, greed and powerplay

VadaChennai, VetriMaaran's first part of the trilogy is an epic slowburner that tells us a blood-curdling story of revenge, greed and powerplay. (more)

'Vada Chennai' is an admirable gangster drama that you can't miss. It'll leave you yearning for the rest of the trilogy.

Vetri Maaran finely crafts this gangster drama with all the aspects of filmmaking at it's best. His 15 year long vision, research and ground work has paid off.(more)

The sprawling nature of the narrative and the various events that impact the lives of the numerous characters make Vada Chennai truly an epic.

Vetri Maaran's rich detailing, be it the life in the prison or outside of it, helps us become a part of the story. Anbu is the protagonist, and gets the meatiest scenes. And Dhanush, in a role that has shades of the characters he played in Pudupettai and Aadukalam, gets some whistle-worthy masala moments, but like he did with Polladhavan, Vetri Maaran makes them organic and in character rather than empty heroism. The director ensures that the other characters have their moments.(more)

Into the heart of North Madras

Vada Chennai is here to stay even if you like it or not. Watch it for the true gutsy performances of the lead characters and well-researched lifestyle of gangster life in North Madras over the last two decades.(more)

Watch it for its gritty realistic feel

Vada Chennai takes its time to unfold, and you may enjoy if you muster the patience for it. Give it a chance, watch it for some excellent acting and for its gritty realistic feel.(more)

A brilliant beginning to Dhanush-Vetrimaaran trilogy.

Vada Chennai is a bloody brilliant film laced with some bone chilling moments accompanied with ingenious music. The writing is breathtaking, the performance exemplary and the visuals are dark and deep, Can a gangster drama be any better?(more)

Vada Chennai is another feather on Vetrimaaran's cap though not in the same league as his earlier films. The way he has built into the story, the rise of gangsters and thrown in political allegories is brutally honest. It also shows how politicians and the slum lords, in the name of development and welfare of the people, are similar in their opportunistic approach and selfish interests.(more)

A gritty action drama that has commendable storytelling, characterizations, and performances.

Director Vetri Maaran strikes gold as every nook and corner of his script has his audience riveted. He has smartly materialized this exceptionally long story into three different parts. The structure is extremely refreshing as many stereotypes are broken and surprise elements hit us like a bolt of lightning at frequent intervals. The movie is air-tight and never drops its pace as the situations propel the story forward and establish the characters with fine layers. The narrative nuances enlighten the experience. (more)

Vetrimaran-Dhanush's gangster drama is as good as it gets

It is not the story that stands out in Vada Chennai. It is how beautifully Vetrimaaran has captured the lifestyle of a place, which is so close and yet so far away from the advancement of modern civilization. (more)

The dense texture of Vetrimaaran's screenplay imagines existence as a carrom board, with every move causing collisions and ricochets. In the past, dressed up in ballooning pants like the ones Prabhu Deva wore in Kadhalan, Anbu meets Padma (Aishwarya Rajesh) � but the meeting is �caused� by Rajiv Gandhi. If he hadn't been assassinated, anarchy wouldn�t have erupted on the streets, and Anbu's mother wouldn't have thought of using the chaos to rob things from a store, and Padma wouldn't have had the same idea, and Anbu may never have collided with her. This is the structure of an epic: the macro casts a shadow over the micro. (more)

A brilliant beginning to Dhanush-Vetrimaaran trilogy

From the first shot of the film, director Vetrimaaran has managed to build suspense. This is not the kind where you wonder about the what, why and how every minute, but the suspense here is audience waiting with bated breath to see how a neighbourhood carrom player takes to violence. The first scene of four men sitting around a table with blood stained knives, and the 360 degree shot that begins from one character and ends with another is a clear indication what life has in store for these four characters. (more)

Vada Chennai, for most parts, keeps it real: The men are full of flaws that are indicative of their backgrounds and upbringing, and the women don't shy away from displaying their anger and greediness. The proceedings tend to drag a bit and the flashbacks could have been reduced. Also, a more careful use of cuss words would have had a greater impact on the scenes. As it stands, the story is a bit slipshod, but the characters and the layered writing will ensure that your attention stands.(more)