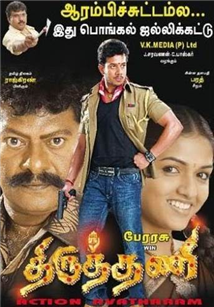 Thiruthani is a must miss

Perarasu's Thiruthani offers you nothing but two and half hours of unadulterated mayhem. It is surprising to see that movies like this are made in this day and age. Though it is true that the movie has been lying in the cans for sometime it would have made no difference even if it had released a couple of years earlier.(more)

There is nothing much to discuss about technical aspects in Thiruthani. It is appalling to note a few action sequences lifted straight from a few popular Tamil movies. Some shots are too pixilated.(more)

Perarasu manages to gives us quite a 'powerful' film

The screenplay follows the regular graph of a Perarasu film � hero introduction fight and song, family emotions, heroine falling for the hero despite his MCP-ish views ("Guys go to a gym to get six-pack, while girls go there only to have sex pack"), hero taking on the bad guys with barely a challenge and even the unnecessary cameo by Perarsu.(more)